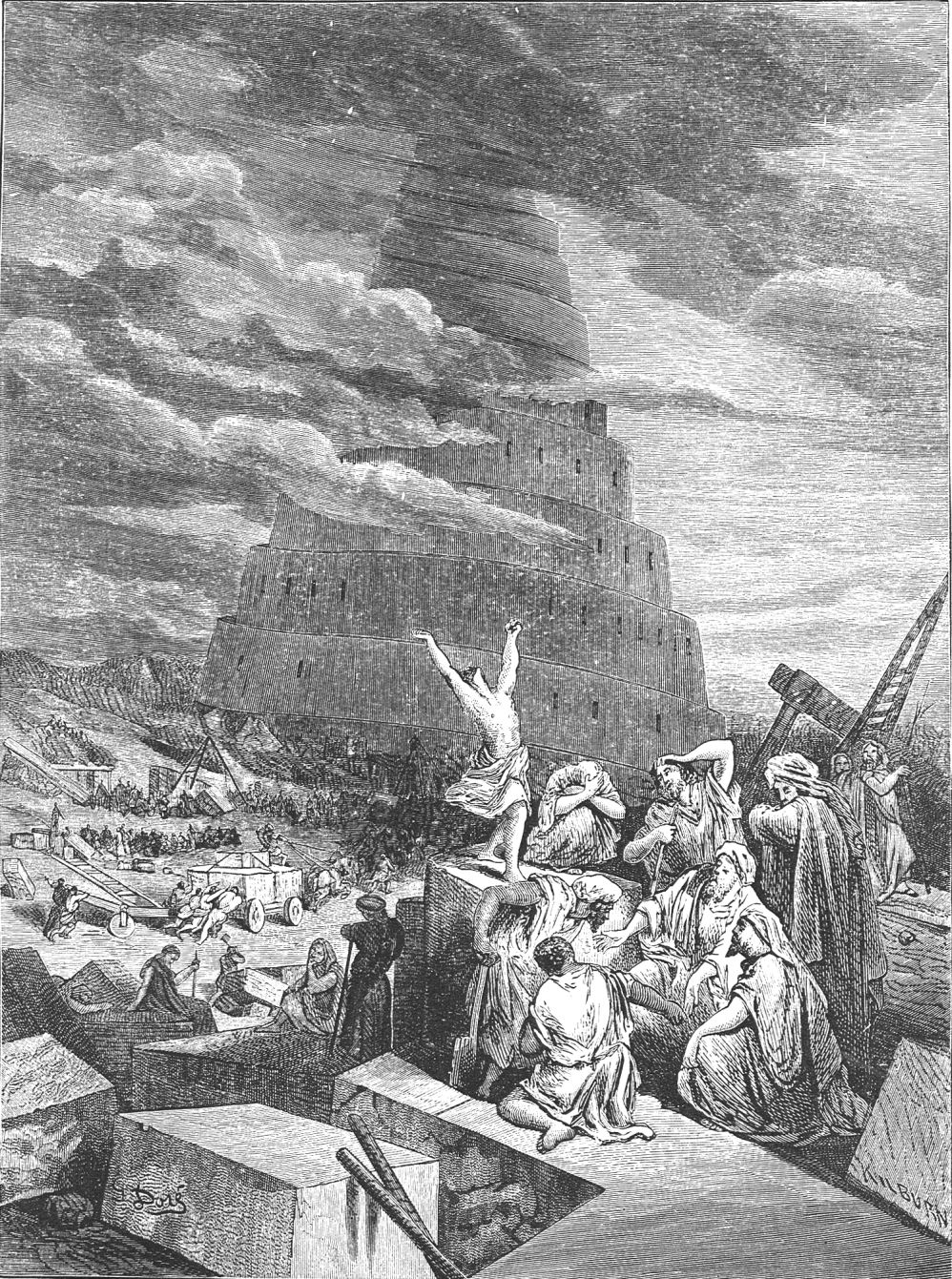 The tower of Babel story in Genesis eleven is often debated over or aligned as something God did to give mankind a multitude of languages. Many scholars and theologians have placed the foundation of this story to show the will of man against the will of God. The passage itself is short consisting of less than a whole chapter. However, the story itself changed the course of history and set the foundation of God’s theocracy on earth. I believe this is the importance of this story, to show how man’s third, and final, fall shaped the future of mankind concerning God and gave rise to God’s disinheritance of the nations while he establishes and sets up his nation of priests.

I argue that the most attention to the story of Babel is unequally given to the beginning of the story. It seems as if most scholars are stuck postulating to the purpose of mankind to build. “Joel Baden writes about famed theologian Hermann Gunkel whose commentary on Genesis ‘argued that this brief story actually comprises two originally independent recensions: one about the building of a tower, and one about the building of a city; the first explaining the dispersion of humanity, the second the confusion of languages.’”[1] This position, although useful and helpful to show the heart of man, takes away from a more holistic approach to the story itself. The real question is not why did man do it, but what effect did it have on humanity? Surely the story can tell us more about history, humanity, and God than multiple languages.

The importance of the story should not be placed on man’s purpose for building the tower but the overarching effect it had on humanity. This can only be achieved if we look at the first eleven chapters of Genesis as a whole. From Genesis one to the call of Abram in eleven, thousands of years, maybe centuries, go by. It is only at the introduction of Abram that the Bible takes on a more micro look at the societal evolution of mankind. From creation to Babel, the Bible gives a pervasive macro look at sin and its cause-effect relationship with God and mankind. “Sin not only radically corrupts the individual, but it invades corporate structures and entities, which strive for mastery without regard for justice. Therefore, God confuses the people’s common language and scatters them throughout the earth.”[2] It is the corrupting power of man, rooted in sin that causes Adam and Eve to betray, the people of the pre-diluvian times to do great evil, and the city of Babel to attempt to control God. Looking at these chapters with a broad view of this rebellious attitude toward God paints the milieu for all the following books of the Bible. It is in this sin that causes God to react so strongly toward man after centuries of grace.

“Von Rad interprets the purpose of these chapters to depict a history of increasing alienation from God which started with the expulsion from the garden, grew with Cain’s murder of Abel and from the heavenly disorder, until this history of sin reached its climax in the tower of Babel which caused a threat of God’s returning creation to primordial chaos.”[3] From this final act of betrayal is where God sets up his own people, a nation of priests where God resides, leads, and protects.

To fully understand the ramification of the Babel story it is incumbent that readers of Genesis understand the context in which it was written. For most Christians, reading any story in Genesis is taken from the viewpoint of Christ’s ministry, crucifixion, and resurrection. Christians tend to read the Old Testament with the New Testament vizors on. This would be a mistake. The correct interpretation of Genesis would be from the viewpoint of second temple Judaism. Better said, we should view the texts of the Old Testament through the eyes of those people who wrote them, a first or second temple Jew.

This viewpoint is crucial to interpreting the cause of the effects of the Babel narrative. From the viewpoint of second temple literature, both in canonical and non-deuterocanonical scripture, early Jewish theology would have not just recognized just one fall in the garden of Eden but three major falls of mankind. Most ancient Israelites and second temple Jews would have viewed the fall in the garden, the flood incident, and finally the tower of Babel story to be three major falls (or sins) against God that prompted God to rise up and lead a nation of His own.[4]  Realizing the context of Genesis is vital to understanding the story of Genesis.

As I have mentioned, what caused the fall at Babel seems to be the target of most theology. As I have argued that the cause is ancillary to the importance of its effect, it is, however, worthy to give a short analysis of what caused God to disinherit his creation.

Most scholars agree that the tower of Babel was a structure known throughout ancient times as a ziggurat. These structures have significance in those times much more theological rooted religious significance than merely building a tall structure to reach God.

Ziggurats symbolized mountains. Both ziggurats and natural mountains were considered in the ancient Near East to be dwelling places of the gods. They were believed to be the place where heaven met earth and where the gods met humanity. As such, it was thought that the high places were sites where the gods made their will known to mortals. In this sense, the ziggurat was viewed as the center of the cosmos.[5]

A ziggurat was a holy structure build to house deities. It was a place where gods could come and dwell in the midst of the people. This was a perfect example of a man defining, or setting the parameters of, God. In Genesis God established a new covenant with Noah tasking him and his offspring; “And you, be fruitful and multiply, increase greatly on the earth and multiply in it. (Genesis 9:7)”[6] We see God establish his parameter to man and give them instruction to disperse across the land and multiply the earth.

In Babel, as with the previous two falls, we see a man choosing his own will instead of God’s will. Man bans together and creates a great civilization. Through this man uniformly grows into a nation of one, losing the diversity nature God intended by dispersion. Rabbi Held writes, “an inevitable consequence of uniformity is anonymity. If everyone says the same words and thinks the same thoughts, then a society emerges in which there is no room for individual tastes, thoughts, and aspirations or for individual projects and creativity.”[7] Due to inclusive nature for man to rebel against God once again and set the terms for his/her relationship with God caused God to confound the languages, disperse the people on his own, and set up a new nation of his allotted people.

One cannot fully comprehend the effect Babel had on humanity without acknowledging a supernatural worldview that ancient Israelites and second temple Jews possessed. This would include God and his divine council, or heavenly hosts. They are included in the tower of Babel narrative. “Against the backdrop of the lack of theological unanimity within Second Temple Judaism, it can coherently be argued that the prevalence of a divine council in the Jewish literature of the period suggests that, for some strands of Judaism, the pre-exilic view of God and his heavenly host had changed very little by the first century C.E.”[8] The writers and early believers of the Babel story would recognize that not only God but his divine council would have their hand in this dispersion of humanity. It is even in the biblical text:

And the Lord said, “Behold, they are one people, and they have all one language, and this is only the beginning of what they will do. And nothing that they propose to do will now be impossible for them. Come, let us go down and there confuse their language, so that they may not understand one another’s speech.” So the Lord dispersed them from there over the face of all the earth, and they left off building the city. Therefore its name was called Babel because there the Lord confused the language of all the earth. And from there the Lord dispersed them over the face of all the earth [9] (Gen 11:6-9).

Notice us in the middle of the passage. God is taking his divine council in his decision process to confound man and scatter him throughout the earth.

This dispersion or scattering of mankind throughout the world has a theological polemic that sets the chains in motion for the entirety of the Old and New Testament. From this point, we get cosmic warfare where God and his nation battle the fallen sons of God and other disinherited nations. Theologian Millard Erickson agreed that the Bible speaks of Angels and “by angels we mean those spiritual beings that God created higher than humans, some of whom have remained obedient to God and carry out his will, and others of whom disobeyed, lost their holy condition, and now oppose and hinder his work.”[10] Renowned Old Testament and ancient Semitic scholar Dr. Michael Heiser carry this a bit further and postulate that God spreads out the world, after Babel, appointing these fallen Gods to head these nations that turned from him and appoints a new nation of people (Israel) where he will use them to reveal himself to mankind. It basically becomes a story of God versus other Gods and the nation of Israel versus other nations.[11]

This story is chronicled in Deuteronomy thirty-two where Moses proclaims this fall, dispersion, and allotment of God’s chose people. He speaks of the fallen sons of God and the nations at war with Israel and God’s triumph over the other gods. It is further evidenced in Psalms eighty-two where God proclaims his judgment on these fallen sons of God. This is the framework and overall purpose of the Babel narrative. One that is left out of most sermons and Bible studies.

The story of the Tower of Babel in Genesis elven is a wonderful tale of power, betrayal, and cataclysmic change. It is a tale of redemption and frustration on behalf of God. It sets the narrative for the rest of the Old Testament and gives us a supernatural glimmer into the cosmic geography that New Testament writers refer to. It tells a supernatural tale much more interesting than man’s greed or rebellion, but a tale of what’s to come in the future of mankind.

Baden, Joel S. “The Tower of Babel: a Case Study in the Competing Methods of Historical and Modern Literary Criticism.” Journal of Biblical Literature 128, no. 2 (2009): 209–224. Accessed February 27, 2019. https://www.thecampuscommon.com/library/ezproxy/ticketdemocs.asp?sch=suo&turl=https://search-ebscohost-com.southuniversity.libproxy.edmc.edu/login.aspx?direct=true&db=rfh&AN=ATLA0001770905&site=eds-live.

[1] Joel S Baden, “The Tower of Babel: a Case Study in the Competing Methods of Historical and Modern Literary Criticism,” Journal of Biblical Literature 128, no. 2 (2009): 209-224, accessed February 27, 2019, https://www.thecampuscommon.com/library/ezproxy/ticketdemocs.asp?sch=suo&turl=https://search-ebscohost-com.southuniversity.libproxy.edmc.edu/login.aspx?direct=true&db=rfh&AN=ATLA0001770905&site=eds-live.

[6]Unless otherwise noted, all scripture will be taken from The Holy Bible: English Standard Version.